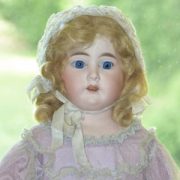 Most of the time I’d sit and stare.

That’s how it started I think.

Her eyes were the open doorway between this place and the next, not that I knew that back then. Though, somewhere in the back of my consciousness I knew that if I spent too long in that place I’d just keep walking and eventually be lost – endlessly searching for…

I don’t think she minded; she’d sometimes do it right back too, but not for the same reason.

Everything about me, actually.

She collected porcelain dolls, among other things. She had hundreds of them, beautifully dressed in early Victorian clothes and polished black buckle shoes. Whenever I turned my back, an uneasy feeling consumed me, like a million pairs of eyes had suddenly sprung to life – watching and waiting.

I remember the first time I visited: There was no television set, just a wall of shelves upon which they all sat, too many to count – with a big blank space in the middle and it was there that she’d look, incoherently whispering the same foreign phrase over and over. I’d ignore it and put it down to dementia, carrying on with my duties.

She was too old to move in and out of the bath so I’d gently jostle her this way and that, doing the job as she sat in her chair. The only chair in the room. Her focus always on that empty space. Her trance like state even continued when she placed her hand on my shoulder and spoke:

“Have you been a good girl, Janet?”

I always smiled at this. “Most of the time.” I’d answer.

It was when I’d feed her, that the conversation really got going: Each of her words, perfectly pronounced, her speech was slow and deliberate. She was German I think but her diction – impeccable.

She became overly interested in my life after the first visit. If I didn’t know better I’d say she was an undercover author, breaking me down, chapter by chapter. I just put it down to the inquisitive mind of a lonely old woman. In a few short weeks she knew all about my childhood, my failed marriage, my dead parents and why at 39 I had not borne any children.

Every day her invasive and enquiring mind would wander to something different, then in mid-sentence she’d stop talking and repeat that phrase over and over, whilst looking into the empty space on the shelf, filling it with her mumbles.

I’d often use the opportunity to silently spoon the porridge like baby food mixture into her mouth. She had no teeth, so solid food was out of the question. It was then that I’d fall into her vacant stare.  I swear that sometimes I’d even feel myself dropping off, woken only when she placed her hand on my shoulder again, slowly speaking:

“Time you were going Janet dear. You do believe, don’t you?”

I’d smile, never quite sure how to answer that question, bending down to collect my belongings and walking from the house, silently closing the front door behind me.

Six months and five days ago she actually remembered my name, greeting me the moment I walked into the room:

“Hello Janet dear. You are a good girl.”

“I’ve made you a beautiful princess dress. Would you like to try it on?”

I nodded politely, following her eyeline which was firmly fixed on a beautiful white Victorian dress that had been placed on the shelf in the previously vacant space. The dolls dress was just like one I’d imagined wearing as a child.

She said nothing for a long while after that. I silently washed her, hoping that my comment hadn’t offended. As I placed the final spoonful in her mouth she stopped looking at the dress and tilted her head forward and toward me so that she was practically nose to nose. There was something different in her eyes that time, a disturbing intensity that I hadn’t seen before. It made me a little dizzy and nervous, but I couldn’t look away.

“You do believe, don’t you Janet dear?” she whispered.

I nodded, hoping she would look away.

I tried to answer, to bid her farewell, but could not speak.  I couldn’t move either, paralysis rapidly consuming everything but my eyes, which frantically searched left and right, as though they were trying to make their own desperate escape.

The old lady seemed to grow too. Her wrinkled old face towering above me as she sat, motionless in the chair. It felt as if I was falling.

I looked down to find that I was wearing the same dolls dress that had been placed on the shelf earlier then I looked up to see her reach down with her bony hand, her giant bony hand and pick me up as though I was a …

She placed me on the shelf, looking deep into my eyes.

“I’m pleased you believe, Janet dear. You can only join the family when you believe.”

I couldn’t talk. I couldn’t move. I had to watch, in horror as she hobbled back to her chair.